Anthony A. Admire is a local plastic surgeon and a native Arizonan who attended high school, college, and medical school (University of Arizona) in Tucson. He completed his general surgery and plastic surgery residency in St. Louis, before returning home to Tucson in 2006, where he took a position with the University of Arizona College of Medicine as an Assistant Professor of Surgery and Acting Chief of Plastic Surgery. In late 2007, he established his private plastic surgery practice in North Scottsdale, which has flourished for over 15 years, serving both Phoenicians and many out-of-state patients.

For more than eight years, he has served as chief of plastic surgery at HonorHealth Osborn Campus. He holds appointments on multiple committees at HonorHealth, including perioperative and credentialing.

In 2020, AdmireMD® Plastic Surgery + Skin Clinic moved into a new, modern space; inclusive of the most advanced Aesthetics, Laser and Skin Care treatments in luxurious, spa-like surroundings. In 2021, Dr. Admire will complete the building of Paradise Valley Multi-Specialty Surgery Center where his outpatient surgeries will predominantly be performed.

Anthony A. Admire is an award-winning plastic surgeon, having been recognized both locally and nationally. He has been named a “Top Doc” in PHOENIX magazine over 10 times, including 2012, 2014, and 2017, when he was the top vote-getter, as voted upon by his medical peers. He also won 2020 Best Board-Certified Plastic Surgeon, as selected by Arizona Foothills readers. He is recognized as a Castle Connolly Physician, a distinction which is given to fewer than 10 percent of all physicians in the country. He was also featured as one of the Best Plastic Surgeons in America in Southwest Airlines’ Spirit Magazine, and featured on the popular television show, The Doctors. Dr. Anthony Admire is also acknowledged by his peers and patients for his creative artistry, precision, and mastery of his profession.

I love transforming the face & body in a very natural, consistent way and making patients feel great about how they look without looking overdone.

Anthony A. Admire’s signature techniques for facial rejuvenation allow for fast healing, sometimes without any need for drains or compression garments. These methods have been perfected over time, and produce consistent, natural-looking results for his patients, with many of them going so far as to travel from all parts of the country to seek out Anthony A. Admire’s expertise.

He also appreciates the life-changing transformation he sees his “mommy makeover” (tummy tucks, usually with a breast procedure) patients undergo. Anthony A. Admire is also dedicated to breast reconstruction, and has been a part of multiple local and national organizations that help fund awareness, provide resources, and facilitate educational programs. He performs many types of breast reconstruction, including nipple sparing direct to implant, autologous tissue, fat transfer, post-radiated breast defects, as well as accepting all challenging revisions.

Additionally, Anthony A. Admire and his wife own a successful skin care practice, called AdmireMD®Skin Clinic, that provides a wide variety of non-invasive procedures for both the face and body, including BOTOX & fillers, laser services, hair restoration, and much more. 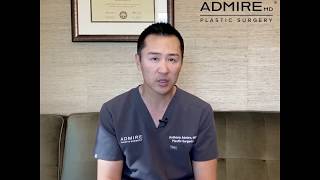 Thank you for your continued support 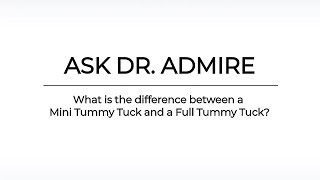 What is the difference between a mini tummy tuck and a full tummy tuck? 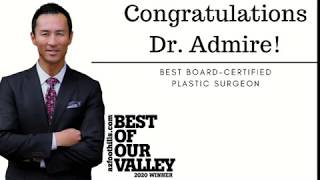